Owl Things Considered
Yes, it is time for my own owls, the ones I made a little over a week ago and have mentioned a few times. I was planning on making an owl for a long time, but was always waiting till I could go to the craftstore and buy sew-on eyes. Eventually I had enough of waiting and decided to make them with material I did have, and just started to crochet. 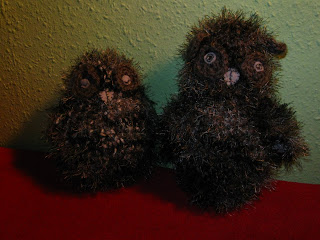 I made the big one first.
In the middle of crocheting I stopped to make eyes out of felt, thread, permanent marker and glitter glue. It turned out better than I hoped and really gave him more of a personality than fake eyes would have done. 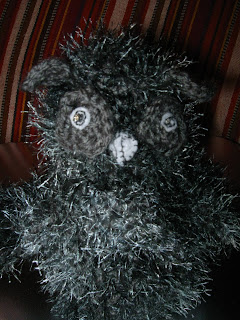 I hope it's not silly to still give stuffed animal a name, I probably should've grown out of that ages ago. Well if it's silly, at least I gave them silly names to match. 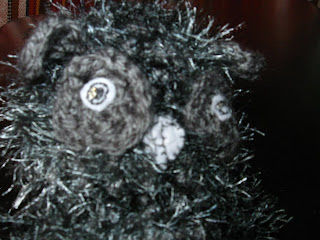 The big one is called Mercator, which is latin for salesperson/seller. Why? I haven't got a clue, but it seems to fit. 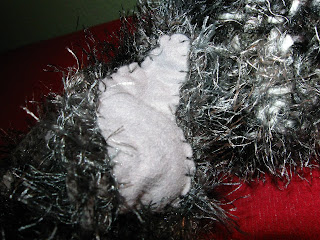 I used the same color felt for the beak and the insides of the wings (;that's what the weird picture above is showing). You can really shape the wings in different positions, I love that. And they stay like that until you move them again, I didn't think they'd be firm enough, but they hold quite well. 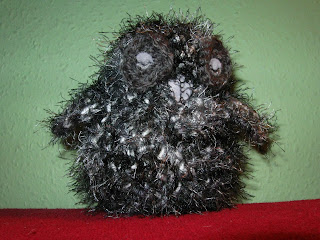 I made the small one last, with the same material except for one kind of yarn (I used two strands for both), I picked a lighter one since baby owls tend to be lighter. I thought he should be fatter and have his eyes closed. I called him Calabash because of his shape. 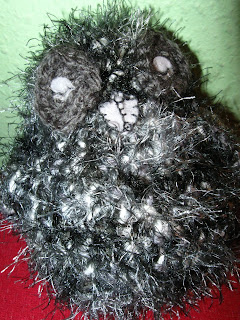 They have such great shapes, although they are both completely different, they both have a tummy and a cute little butt.
I already made a different kind of owl, but it's still an idea that needs to be worked out more. I'm planning on putting them on my etsy, when I feel I've got the hang of it. And when I finally get that creditcard. It should be here any day now, hopefully. I can't wait!
I might make one of these owls for my etsy too (probably the baby), maybe in a different color, I still have to try some other things out...
Oh, one more thing! I start my 3-month art school course tomorrow. I am so excited! I feel things are coming together again. December was such a weird month, everything that was going great fell of track. Before the holidays came I stopped eating chocolate and was exercising an hour a day, doing exercises with weights, stretching and some other stuff. Not to lose weight, but to gain energy, although losing weight might be a side affect, of course. Then the holidays came, and the flu, and I started eating more candy and quitting on my program. On top of that my computer isn't working so I lost my workout-playlist on iTunes. But...
I started again yesterday! And have already done it again today. So I feel I'm getting back on track again. I hope I can keep it up when I'm starting school again; I'll try my best!
Geplaatst door Blue Eyed Night Owl op 8:13 AM