Do as done and there is nothing left to be...

Singer/songwriter Laura Marling truly has such a unique sound and writes such original songs. I can't imagine hearing one of her songs and not instantly recognizing her. 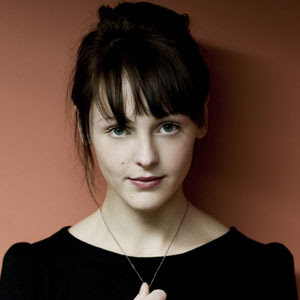 I had the pleasure of seeing her perform live and even meeting her later on, where she also signed my guitar strap(which I often take to concerts and have had signed by some amazing musicians). She seems like a very sincere and lovely person and she looks so delicate and a bit like she's from another era entirely. I mean that in the best possible way though, it's so very rare to meet such a person.
Prior to her solo career she was part of Noah and the Whale. You might recognize this song (it never gets old, now does it?):
Her new cd has been out for over a year, but I have this weird habit of sticking to one cd if I really like it. Though often I get excited about a new release, I sometimes get a bit anxious too and just put it off entirely. Anyone else do that?
Geplaatst door Blue Eyed Night Owl op 1:28 PM