And the Giraffe Interview

I have something special in store today! An amazing new band has come to my attention recently and today you can enjoy an actual interview with them!
And the Giraffe is a duo of friends that have just released their first EP, however it doesn't sound like they've just started out at all. I've been in touch with Nick, one half of the duo, who (like me) is only twenty, but the EP has such a mature and well-rounded collection of songs.
You can't help but get lost in this music completely. It's very dreamy and if you enjoyed Iron and Wine last week you will absolutely love this! And... you can download it for free! Or you can pay whatever you like or buy the actual tangible EP off their website. 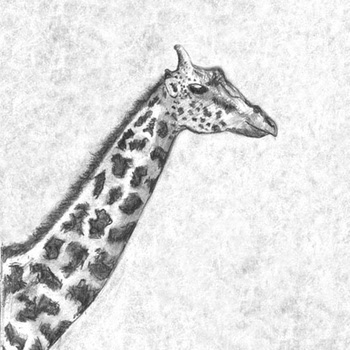 Play the song above while you check out the interview!

"Hey everyone, we're And the Giraffe. The project consists of myself, Nick Roberts, and my best friend Josh Morris. We're from Gainesville, FL, and after making the transition from acoustic folk songs to "dream-folk," we couldn't be happier and we hope to continue making music together for as long as possible. It's a bit tough to coordinate things now that Josh lives in Nashville, TN, but we manage. Thanks for taking an interest in what we're doing and reading what we're about!"

First off, the obvious question: why “And the Giraffe”?

We were thinking about band names when we were first starting out and just throwing out ideas. Nick suggested Giraffe as our band name. I then thought maybe we could name ourselves The Pelican and the Giraffe after the Roald Dahl book. That was too long so I think Nick suggested dropping just the Pelican part; It sounded cool and that's how we came to be known as And the Giraffe. Unfortunately some people think our name is Giraffe when we get put at the end of a bill, but we love it all the same.

What inspires you to make your music?

J: Other music for sure. When I was 15, my friend and I went to go see a local band called The Heathens in Orlando. After seeing them play, all I wanted to do was make music. It seemed like a really worthwhile pursuit. Now it's my sounding board for whenever I need to think things through and my escape. I think Nick and I also get really inspired when learning about other people's artistic processes; we've watched a number of album documentaries with I Am Trying To Break Your Heart being one of the best ones we've ever seen.

N: I think Josh summed it up pretty well. Just the sheer power and emotion that comes from other musicians and their talents is inspiring enough to try it ourselves. I love watching how other people go through their artistic process in hopes that we can get inspired in the same way or similarly. And I think above all else, music is a form of escapism. It allows us to venture into new worlds that don’t yet exist and explore them and craft them however we want.

What are you trying to say with your lyrics? What do you hope people pick up from listening to your music?

J: My lyrics are about what's going on for me when I write the song. I realized the other night that I tend to be a little angsty when I write, so I kind of hope people agree with me more than see me as a whiny young adult.

N: When I write I try to keep things a bit more vague than what’s actually going on in my life. Stories unfold around a central idea I’m trying to convey and that’s normally what the songs end up being about. While they’re somewhat based in truth, I like to take an artistic liberty by writing about feelings, emotions, and places that don’t necessarily exist.

How do you go about songwriting?

J: There is no process for me. It's always different for every song. Masquerade was written in an hour and Still took nearly 6 months. They just happen and I don't know how; I don't try to question it. I think sometimes I over think it and that'll hold me back.

N: Just as Josh said, there’s no specific process. For me I sometimes can see or feel an entire song’s path before I ever sit down to record it. Other times though I’ll have to sit down at the computer with different song segments laid out and arrange them in a visual manner. It’s easier for me to direct a song when the puzzle pieces are sitting in front of me. It’s fun to move things around and try them in different places. Once the general framework of a song has been laid out, the recording actually happens.

What are your plans now that the EP is finished?

J: I think we're both trying to survive school at the moment. We have started working on our next EP or album though. We're probably going to tour for a bit next summer as well.

N: School is definitely killing me at the moment, so any time I can find to play music is like a gift. We’ve got plans for some new songs already, but I think that live performances are next on the agenda. All we need are more friends to help us out!

If you could pick three cds to take to that desert island, which ones would you choose?

J: Oh man, uh... 1) Abbey Road by The Beatles 2) The Moon and Antarctica and 3) Dark Side of the Moon by Pink Floyd or End of Amnesia by M. Ward

N: I always regret my decisions when questions like this come up! 1) For Emma, Forever Ago by Bon Iver 2) I Am Responsible by Ef, and 3) In Real Life Color by Magic Man. Ask me again tomorrow though….

Do you have any early childhood memories regarding music?

J: My parents played me lots of good music for me when I was little. A whole lot of the Beach Boys, The Beatles, Queen, The Clash, T. Rex, Simon and Garfunkel, and more were always being played for me. I do remember there was an album that my sister liked a lot that my mom played to death when I was maybe six or seven year old. I can't remember the name of the artist now, but I actually scratched the CD to the point of being unplayable. I've always had kind of a strong opinion on what I think is good and what I don't. In my opinion, there's way too much good music to waste your time listening to bad music.

N: I wish I did. I didn’t really get into music until my early teens. While my parents liked music, it was never anything I could get behind. I guess my earliest personal memory from childhood regarding music was the first CD I ever got: An N*SYNC Christmas. Thankfully, I think I lost it a few days after getting it.

J: There would be world peace, no poverty and everyone would be happy. People would also have better music taste and they would be into their local music scenes.

N: In addition to Josh’s, I’d like to see a world that’s less focused on “getting ahead” and a corporate education system. I think our drive for money and the “American dream” has done more harm than good in terms of the stress it causes to people.

And lastly, is there anything you have to add or would like to tell my readers about?

J: If you listened to our music, thank you! If you liked it and downloaded it, you rock!

N: I know we put it at the end of all of our emails, but we’re sincerely grateful to anyone who took the time to listen to what we have to offer. Thanks for reading and listening!