the Order of Odd-Fish

I'll admit I bought "the order of Odd-Fish" because the cover was pretty. I often judge a book by its cover and I'm often right, so I took the plunge and ended up in the most bizarre world I'd ever been in. Now I read a lot of Murakami so you can't say I'm not used to the bizarre, but this really was truly bizarre. Think talking cockroaches, crazy villains, silver kittens of deceit and knights that devote themselves to useless tasks. 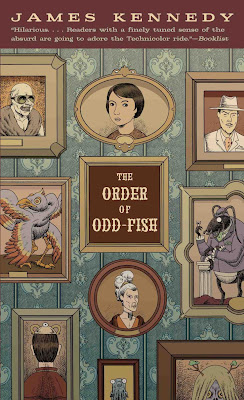 {source}
The first 50 pages intrigued me, the next 50 pages had put me off a bit, but after that I was hooked! I was suddenly completely emerged in the world James Kennedy had created and was really anxious to find out what would happen to Jo and the story in general.
I don't really want to get into the entire story here, but the bottomline is: Jo lives with her aunt Lily in California. Lily is a bit of an eccentric, but all is fine until in comes Sefino the talking cockroach and a few other characters. Before you know it they're chased by villains such as the Belgian Prankster, all the way to Eldritch city where all the Odd-Fish reside.
The problem is that Jo has the ability to destroy the entire world. She has to keep this knowledge to herself as everyone in the city would probably want to kill her for it. Everything is, of course, very new and strange to her too and she'll have to work hard to understand as well as survive this adventure.
---
It's a very fun read once you get to the point where you can surrender to the bizarre and just take it as it comes. Despite everything being very strange it's somehow very human too. The characters are lovely and you feel like you really get to know them.
If you are into realistic novels this book probably isn't for you. But if you like weird stuff you are in for a real treat!
Also, there will be a sequel! But this book is great by itself too. There are definitely characters that can be followed further than we have now, but there aren't any cliffhangers either. So you don't have to read the sequel if you read this one, but I think I will.
Geplaatst door Blue Eyed Night Owl op 12:40 AM

Email ThisBlogThis!Share to TwitterShare to FacebookShare to Pinterest
Labels: bizarre and beautiful, books